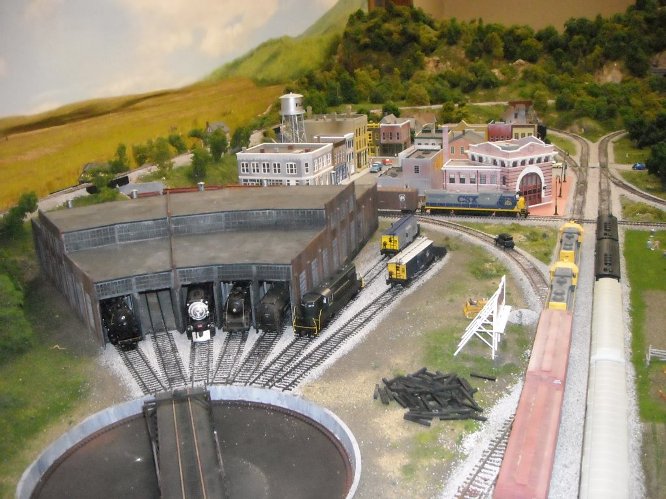 The newest addition to Flora’s historic B&O Depot Museum features a miniature train layout that is 23 feet long and features two trains moving on two different tracks along the length of the layout.

Surrounded by mountains that depict the Smokies on the east and the Rockies on the west, the trains travel through a miniature city in the middle.  Representing the City of Flora, replicas of the existing historic depot and the once existing B&O roundhouse are easily recognized.  They mark the center of the community layout.

Mounted on one of the trains is a miniature camera.  It transmits images to a 70-inch TV monitor mounted on the north wall of the large room.  That gives viewers a live picture of what riders on the moving train would see if they were passengers riding through the entire exhibit, including tunnels passing through the mountains.

The professionally built train display is a fascinating attraction for young and old alike.  Also on display in the north room are boards salvaged from a barn loft once located east of the existing tracks that still pass through Flora today.  On those wallboards are images and names carved by hobos who hitched rides on freight trains during the depression and as far back as 1908.

Other exhibits include transportation artifacts from when Flora was the nation’s population center. The Ford Motor Company brought its newest models to town for all Flora residents to drive, as a way to introduce the new cars to the nation.

The train room is available to rent for various events and has already hosted birthday parties for residents as young as age 4 and as old as age 90.